What kinds of swingers are there?

We can distinct the following forms:

Soft swap, also known as soft swinging, soft swing, softcore swap or swinging light, is the simplest and most innocent kind of swinging there is. A lot of couples who make their first partner swap, start this way. It is relatively innocent (at least in the eyes of “real” hardcore swingers). But for couples, who take their first steps into the swinging lifestyle, this is really very exciting. Maybe it even is the biggest step there is, to decide to have you first physical contact with another couple. This truly can and will be thrilling moments for both of you.

Possibly, it will also be the first time of your life, that you'll see other people having sex in real life, right before you and probably also the first time that other people see you fucking. Of course, this is quite a big step in itself, somewhat similar to going to the nude beach for the first time. A certain amount of hesitation has to be overcome and for some men it is important to get a good erection and be able to hold it. In the beginning, this can be a bit more difficult when people are watching.

Full Swap swingers go a long way beyond soft swinging. Full swap means there is really sex and intercourse happening with another couple. In this form of swinging both he and she are fucking with other persons . For many swingers this is the icing on the cake. This is the real deal and once you tasted this forbidden fruit, you probably don't want to meet up with softswap swingers anymore, because that would be a huge step backwards.

Also full swap has different variants:
Full Swap in the same room,
Full Swap in separate rooms (so you don’t see each other),
Full Swap with bisexual sex too

Private swingers parties with a lot of couples and sometimes some swingles (=swinging singles) too, have been around for a long time, but are becoming more and more popular each year. These swingers parties are only visited by people, who don't belong to the soft swingers category, because it can get pretty wild. But neither are these parties suitable for all full swap swingers, because a private swingers party really is a different league.

During "normal" swingers dates, it is sort of obvious, what can happen next and the four of you have a good overview of everything, what is happening to you and your partner.

At sexparties where there are many more couples (this can vary from 3 till over 30 couples), there is little or no structure left. Sex can take place with anybody without knowing who is the partner of the person, who is flirting or having fun with your spouse. Often you don't know who belongs to whom and with whom your partner is fucking at this moment.

Solo Sexdate without your own partner

In some relationships the partners have agreed, that they also like to have sex independently from each other with other people. So there is no swingers date, where two or more couples have sex together, but a single woman or a man meets up with another single man or woman to have a sex with.

The husband and wife of the couple have given each other completely freedom to do whatever they like. They are having a free open relationship. So e.g. instead of going out with her friends to a pub on Friday night, the woman is going on a sexdate with a stranger. While her partner is quietly watching television at home on the couch, she is getting ready to fuck someone else and he wishes her lots of sex pleasure, when she is on her way out to see her date. When she comes back, he asks genuinely interested, what the sex was like. Of course he has the same privileges and the freedom to go on sexdates with whom he can.

Whether or not this really belongs to swinging, is open for discussion. The fact is, that some swingercouples have agreed to this among themselves and enjoy it. So we will certainly not judge it, but in our opinion, this is not part of the classic wife swapping, in which both partners of a couple are having sex at the same time with another couple. But who cares whether or not, it fits into the classic form of swinging, as long as both partners enjoy it, we can certainly understand the benefits.

However they do miss out on one of the great pleasures of a sexpartner swap, namely that you can see your own partner enjoying sex with someone else. With solo sexdating this is unfortunately not possible. But solo sexdate does has another advantage. Possible certain inhibitions, that you might have when your own partner is present, can be left at home and maybe you feel more free to do things you normally don’t want or don’t dare to do when your partner is around.

The trio sex that we mean here, however, is really a trio sex date, that arises because a couple would like to have an extra sexpartner. In the past, in 90% of all cases that would be an extra woman. So two women can spoil the man. Or the women can have bisexual sex or a combination of both. About 10 years ago, an extra woman was often looking for a needle in a haystack. Especially because almost everyone was looking for it, the chances of success were quite small. However, nowadays it is much easier and there are more women willing to have sex with a couple. Certainly when both women are bisexual, the chances of a trio sex date have increased a lot and it is not very difficult anymore to arrange such a date at SDC.

Most couples who like trio sex, are still looking for female/female/male (ffm) dates. An extra man was not very popular in the past. However, there is a big upward trend in this kind of dating as well. The taboo that some women like to be pampered by two men at once, seems to have disappeared and the acceptance of the man, that his wife sometimes likes an extra dick to play with, seems to have grown. Why should only he be allowed to have sex with two women and not his wife with two men? So the chances of single guys to get lucky with a couple are much bigger now. A good place for a male singles to meet those couples is again SDC.

Couples who are looking for singles are usually “normal” swingerscouples, who for a change, do not invite a couple, but a single woman or single man. However, there are also "swingers" who only go for trio sex encounters and do not want to date a couple. This is not really swinging in the classic way, where two couples are having sex with each other. But as long as anybody is having fun, who cares.

Go to the next topic:
Wife swapping 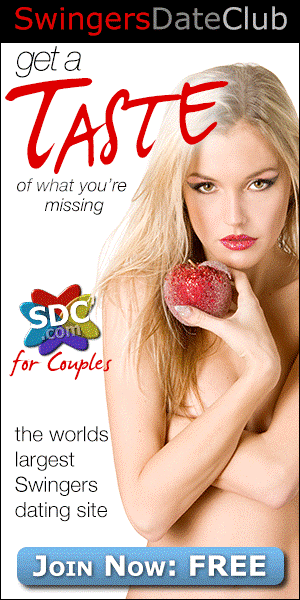